Tear down the wall, save Berlin or catch the drug lord! 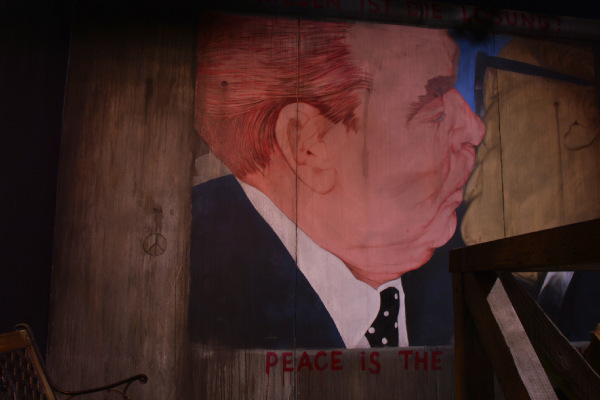 Make a Break is the alternative escape room of berlin with a personality. Colorful and captivating, just like Berlin.

“Escape Rooms 1.0 are not up to date anymore and thats why we work with professional stage designers – which usually build the scenery of theatres and leisure parks – to create our rooms with a high degree of authenticity and detail. Our ultimate goal is to create an authentic experience – fitting the particular story perfectly. Our escape games contain some special elements like a reconstructed part of the berlin wall, virtual-reality googles and a 3D-printer."

Have a look at the current three missions and choose the most suitable for you! Besides, the Make-a-Break-team asked Berlin street artists to decorate the venue in the bustling district of Friedrichshain. The result? Escape rooms, that are more than authentic. Only a 5-minute walk from S+U-Bahn station Frankfurter Allee or a 10-minute walk from the hip Simon-Dach-Straße, you’ll find the rooms faster than the exit out of them.

Mission - Tear Down This Wall

East Berlin, 9 November 1989. The Berlin Wall appears to stand firmly despite East German protesters demanding that border guards immediately open the gates. The swamped guards are waiting for the orders… to shoot or to give in? The West German secret service asks you to carry out a top secret mission. In exchange for helping you escape to the West, you are to broadcast fake orders to the East German border guard to open the gates. But beware: you only have 60 minutes before the East German communication systems are shut down! Your journey will involve capturing secret documents in East Berlin, smuggling them to West Berlin, and using the East German communication systems to end this stalemate. Break through the Wall and pioneer the new beginning in the Federal Republic of Germany!

The Cook is dead. The pure quality drug crystal meth that he has put out on the street in collaboration with his accomplice, the mysterious Criminal Mastermind, has long been worshipped by his customers – and chased after by the authorities… in vain. As smart and dedicated members of Berlin’s specialist drug enforcement force you have been working relentlessly for years to put the elusive duo in jail. With the Mastermind being unaware of the Cook’s sudden death, you quickly grasp that the only chance of catching him is through impersonating the ingenious chemist: 99% purity was the Cook’s signature. But this stuff is highly perishable! You have got only one hour to prepare the Cook’s final batch and catch the mastermind.

Berlin’s streets are overrun by the undead. Two weeks on from the outbreak of the horrible and mysterious zombie virus, an unimaginable chaos has erupted in the capital. The majority of the once carefree and harmless inhabitants turned into vicious, mindless monsters who have only one goal: to feast on your brain! To make things worse, last night, Berlin’s only hope, an accomplished professor and virologist of Charité, disappeared. Now there is no one left but you to you to finish his work and save the city! Enter his office and complete the antidote! But you must hurry: The zombies in the streets are hungry and the doors won’t hold forever. Only for 60 minutes…

Benefits from your ISIC, IYTC and ITIC

As an ISIC, ITIC, or IYTC cardholder, you will get 25 % off the regular admission fee*, redeemable for all three missions. Just verify your card number here to get your voucher code.

Don't have an ISIC yet? Get your card here.

*Discount valid for games on monday-thursday.

The general terms and conditions of payment of the provider apply in this case.
This page contains external links. Links to www.isic.org refer to offers from the ISIC organisation, to which the GDPR/DSGVO apply.  More information on privacy policies.